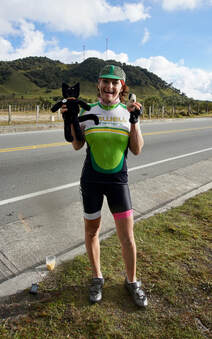 GOAL SETTING AT ITS WORST!

​Me and big mouth! I had told everyone about this stupid climb in Colombia and now I am so sorry. There is no going back or quitting. Only forward. The longest climb on earth seemed like a great idea when I booked it, in reality it was the worst day of my life! 80 kilometers of sheer stupidness, what was I thinking when I booked it?

After months of planning and training, the Alto de Letras day was here and I was suffering badly. In fact that’s an understatement. I was in so much pain and in the horrors I can’t even put it into words. My back was screaming, the balls of my feet were burning,  I had saddle sores and chaffing. I couldn’t get any sort of rhythm going and my motivation had gone on a day trip!

I also had suffered the worst food poisoning imaginable from a dodgy prawn five days earlier. It had drained me of every body fluid imaginable. How is it every time I decide to an epic cycle my guts let me down? (There was the Marmotte and the tampax saga and while on Mont Ventoux I got an upset tummy!)

I really felt awful. I was so weak. I hadn’t managed to eat much or keep anything in me for the last five days. I hadn’t slept much either due to having to run to the bathroom periodically.  I was floored and afraid of every gurgle I heard or felt in my tummy.

​The night before my epic spin I managed to eat a burger and my tummy was ok with it.  However an 80km climb with 3675 meters needs a little more fuel than that.  I knew it was going to be a tough spin even if I was in the best of health and this really wasn’t what I needed.

I had looked at the profile of the climb and my guide had discussed the important bits with me. There would be a town at 20, 40 and 60km. After sixty there would be a tough 14km at 7% gradient. It would also take me above 3000m altitude. Then I could look forward to a flat 2 kilometers and then the last drag to the finish would be really easy. I was mentally prepared and knew I could do it if I broke it down into four sections.

The trouble was, I was so slow. Unbelievably slow. So the kilometers were not passing. Every time I looked at my bike computer it hadn’t moved. I was stuck on this God forsaken climb and I hated  every minute of it. Each of my sections were never ending. I was desperately trying to stay upbeat.

The the first 60km were by far the worst! Motivation was waning, I was so tempted to get off and walk, or just give up. I thought it would never end, I was going nowhere. On the plus side the temperature was very pleasant. We had started early enough to get up high before the midday sun.

I was talking to myself, singing and chatting to my travel Snoopy teddy in my pocket. It was a bit like Castaway and Wilson. It’s all I could do to stay sane! The scenery was stunning in places and trying to take photos of the vistas passed a few minutes. I was too tired though and the camera was just too much to operate while cycling. I tried to just enjoy the view and forget about the road for a bit instead.

At 59 kilometers there was a downhill bit! I couldn’t believe it. Hallelujah. However there were also  two mad, black dogs who decided I looked tasty and gave chase. I was seriously afraid and peddled as hard as I possibly could. Thank God it was on a down bit or I think I may have been their dinner. They were right at my ankle and I could see their teeth! A driver in a car came by me; thankfully beeping and swerving towards the dogs to scare them for me.  I was absolutely terrified, my concentration wasn’t great at this time due to exhaustion.

Wouldn’t you know it, that stressful episode brought me straight into the 14 kilometer climb. On the plus side I had the back of the 80 kilometers  broken now and I could actually think about finishing. I had done the Alpe D’huez at the end of the Marmotte and it was murder. (That’s also 14 kilometers.) However, that was some years ago. I’m a much better cyclists now so I knew I could do it provided I went very slowly, singing and chatting to myself.

The support vehicle was all mine now. The guides friends who were cycling that day had finished long ago. I felt bad that I was taking so long but what could I do? They hadn’t got food poisoning, they are young men too in comparison to my middle aged lady status! (One was 26, I’m 45!)

While I had the support vehicle and she was great for looking after me, my cycle guide was nowhere to be seen. He had decided to race one of his friends that day and aim for a personal best. I know he did it in 4 hours 30 minutes, (he told me) I know I took 8 hours. I’m not entirely sure where he was for those 3 hours but I know he was  NOT helping his wife who was driving the support vehicle or helping me!

He dollied up to me at 70 kilometers and decided I needed advice on how to cycle.

Then we had the ” I like to get up out of my saddle and give my back a stretch, look at me!”
I lost it.
​I had gotten myself this far and really did not appreciate his inane comments!!
I politely asked him to go away and leave me alone. I had gotten myself this far, I was having “fun” and was grand. I told him to go on and I would see him at the top.
Lucky for him he had the street smarts to leave me alone!

The end is near

At 75km my support vehicle was waiting for me with my jacket. There would be a 2 km down hill and then 3 km climb to the finish (3528m) which was allegedly an “easy uphill.”

My jacket was too warm but at the same time I was glad of it. The downhill was so welcome and I really tried to put the boot down. Then it started to go up again and my little legs slowed right down again. Where was the end of this road at all? I couldn’t wait to finish, my back was in tatters at this stage, my seat and bits were so sore and I just didn’t have enough fuel in me for this.

The summit is the most uninteresting place on the earth! There is no sign post, no fanfare, no stunning photo opportunity. It’s just a flat bit before the decent starts. It’s bleak and has no noticeable landmarks or redeeming features.

I was delighted to finish though and was so glad to see the support vehicle  waiting for me. I flopped off the bike and tried to smile for the photos.
I got presented with a lovely cat teddy, he’s the company’s logo and an alternative to a Alt de Letras Medal. I guzzled a protein shake and changed my jersey for the photos.

Flying the flag for Orwell Wheelers!

My stomach decided to revisit the food poisoning and it started to act up again. Badly. I couldn’t keep anything in me yet again. It continued for another five days after the spin. I think my body was in shock.

I did my best with Pepto Bismol, stopped eating before my flights and tired every Irish mammies favourite remedy: flat 7Up. In the end I had to take a trip to the doctors and get an antibiotic for a bacterial infection. On the plus side I lost 3.5 kilos (half a stone!) and I don’t have to worry about January blubber!

Would I do the Alto de Letras again? Hell no!
Would I recommend the longest climb on earth? Not a chance!

What I will say is, my holidays are going to be holidays from now on. Lesson learnt! My cycling trips are my cycling trips but my actually vacation, the one I work hard all year for, is now a challenge free zone. No more stupid stuff!! Just go and enjoy the country,  sightsee and relax. Sure I will cycle the Dolomites in June 2019 with my friends  but that is a designated cycle holiday!

Join me in March or October 2019 for a designated cycling trip to Spain. Complete with Yoga for Cyclists for recovery. This trip is for winter miles and smiles. We have climbs but they are respectable in comparison to the Alto de Letras! 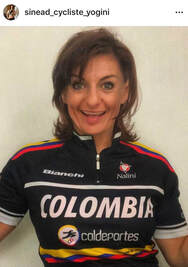 Sinéad
About the Author:
Sinéad Kennedy is a Physical Therapist, Yoga Siromani and Pilates Instructor. She has recently qualified as a Personal Development Coach. Based in both Rathfarnham and Dundrum, South County Dublin. She treats and teaches people from all walks of life, including many athletes, especially cyclists, runners and golfers. Recently featured in the Irish Independent, FIT Magazine and Breaking News.ie her Yoga 4 Cyclists class has gained notoriety.
​
A keen cyclist and proud member of Orwell Wheelers she has completed numerous cycling events including The Alto de Letras, Les Cingles du Mont Ventoux & La Marmotte Sportive. She is an accomplished audax-er having done numerous 200km and 300km routes. Sinéad has also completed three Dublin City Marathons, numerous Adventure Races and Half Marathons.