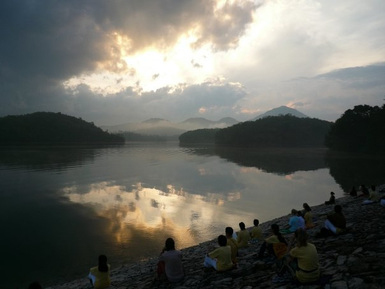 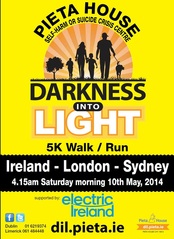 Over the last few years there has been much needed public relations regarding mental health, depressions and suicide. Events such as Cycle against Suicide, Pietas Darkness into Light and Aware’s Christmas runs have all helped to bring mental health illness to the forefront of conversation. All fantastic events run by tireless volunteers. Having attended a couple of them I can honestly say they are a great way to get people talking about depression.

I got a call from a Psychiatric unit recently, asking me would I be able to help the patients with a Yoga class.

The hospital is trying to encourage a smoke free environment and wanted to do something nice to help the smokers quit the habit. I was more than happy to volunteer my time and services for an hour or so, I was free anyway.

I didn’t think much about the class, a thirty minute Yoga class was all they wanted, a bit of breathing and some light movement. No big deal. I would bring the mats and music, arrive promptly at 2pm.

So Thursday came and sure enough, 2pm, I was being escorted through the corridors of the hospital, the manager was incredibly sweet and kept reassuring me that my safety would not be compromised. I would have nurses and a guard present with me in the class.
Sorry!!?
It hadn’t occurred to me that this was a public psychiatric ward and there might just be some aggression, violence, behavioural issues and mental health issues amongst the patients. The double doors opened, I walked into a high security unit. I left the safety and comfort of my lovely life behind those doors and walked into a place I could never have imagined. The atmosphere was heavy, like a burden dropping suddenly on your shoulders. Patients were shuffling about, some in dressing gowns and others in leisure wear. there was shouting, I’m not sure what was going on but it was becoming a little bit harrowing. I only walked a short distance to the recreational room but it was enough to shock me, not quite on a par with how Hollywood might depict an asylum but close enough to give me a kick into reality.

I laid out a few mats and plugged in the music, the usual holistic wishy washy, relaxation, water bubbling type melody you would expect. The door opened and in they came. My class participants had arrived.

I do not think anything would have prepared me for the sight of bandages trying to conceal a slashed throat. Another person had bandages on both their wrists.  A very elderly man came in shaking and sat in a chair. Another had multiple slash wounds on their arm from years of self harming. There were three large burly young men, full of chat and interest in me and Yoga. I hadn’t given any consideration to the people I might be teaching that day, it never even crossed my mind.  In all I had 10 for the class. All different levels of agitated, some engaged with me and some didn’t. Two nurses and one guard watched the proceedings.

Normally my Yoga classes are quite straight forward, most people will listen and most people will at least try to do the moves. I realised very quickly that this would be no ordinary Yoga class and had to think on my feet. I asked them all to lie down, close their eyes and focus on their breath. To my biggest shock, the three burly young men were first down, eyes shut and breathing deeply. Some of the quieter patients started to become disruptive to each other, giggling and shouting. It was fine, the nurse had warned me just to keep going no matter what “they” get up to. One got up and walked out, one continued to roll around the floor, the others started to settle down. I now had 9 and 6 were truly focusing on their breath and three just need more time.

We spent a few minutes breathing deeply, aiming to relax them, its the same way smokers use their long slow exhale to calm them down. They think it’s the nicotine but it’s actually the breathing mechanism thats calms the nerves. Psychiatric unit patients are allowed to smoke in designated smoking areas and to be honest, as much as I hate smoking I think let them off, they have enough going on their lives.

After the breathing exercises we sat up for some gently movement. The three that were most agitated seemed to like this bit, they liked to move about, a lot! It became apparent very quickly that left and right were an issue. It’s funny how you take the simplest things for granted. Keep it simple, keep it real. Encouraging them seemed to work wonders for them. It didn’t matter what they did, the more I praised them the more they engaged with me. I wonder if they had ever been praised or commended for doing anything in their lives? The room we were in was pretty depressing to be honest but somehow it was getting brighter. They were starting to enjoy themselves, really listen and follow as best they could. They were engaged, completely different to how they were at the start of class. Smiling, concentrating on their bodies, pushing themselves to try something new.  Some simple breathing exercises, stretches and easy seated movement was all it took. 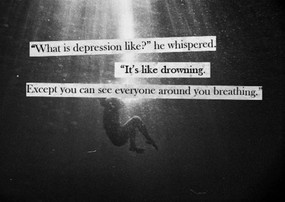 We finished off with more relaxation and breathing. All nine were now happy, breathing deeply, no agitation, not a hint of aggression, no more bouncing around, calm and lightness seemed to fill the room. When I finished off the class a few bolted out the door but to my joy, a few came up and had a little chat with me. They thanked me for the class, said how much they enjoyed it and asked me a few questions about myself.

It really was an amazing way to spend the afternoon. I went there expecting to teach them about Yoga, in fact they taught me how to be a better teacher. Not just a yoga teacher, but perhaps now, armed with the knowledge that breathing and a little praise can calm someone down, bring someone from a darkness to light with little or no effort, perhaps I can teach others. Should we not be teaching this to parents, school teachers, in our prisons and full time in psychiatric units? After all, it was completely drug free. One person helped nine people to engage with their body and feel alive. Nine people thought one that they are human too and deserve the best treatment we can offer. Surely this would be a much cheaper and effective way to help our society instead of throwing drugs down their throats. We can all cycle, run and talk about mental help, but really, for the people inside there, the ones with bandages on their throats and wrists, they need immediate action, they need help to feel human again.

Sinéad
About the Author:
Sinéad Kennedy is a Physical Therapist, Yoga Siromani and Pilates Instructor, based in South County Dublin. She treats and teaches people from all walks of life, including many athletes, especially cyclists, runners & golfers. Recently featured in the Irish Independant, FIT Magazine, her Yoga 4 Cyclists class has gained notoriety.
A keen cyclist and proud member of Orwell Wheelers she has completed numerous cycling events including La Marmotte Sportive.  Sinéad has also completed two Dublin City Marathons, numerous Adventure Races and Half Marathons.