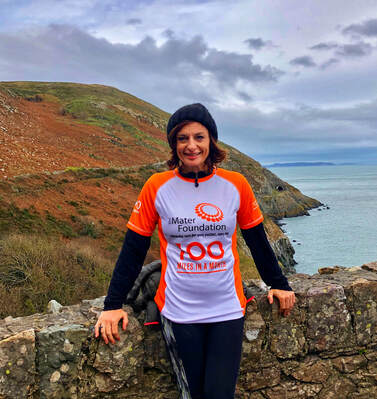 MILES THAT MATER – RUNNING FOR THE MATER FOUNDATION

By Sinead_KennedyOctober 3, 2019October 8th, 2020No Comments
February is always a lovely month I think. Winter is over, the evenings here in the northern hemisphere are getting longer. The daffodils are starting to sprout out and generally people are feeling a bit more human again.
In January I spotted on Facebook a lovely charity challenge for the upcoming  month of February. It was to run, walk or crawl one hundred miles in aid of the Mater Foundation. I thought that it would be a really nice challenge to set myself and that I could “easily do it”. It didn’t take much convincing to get my sister onboard too who then duly convinced her friend to sign up!

We registered, started fundraising, joined the “100 miles for the Mater facebook group” which was great for motivation, tips and to chat with others doing the challenge.

I was the first to get sick! Quite sick in fact. I had got “food poisoning” on holidays and it just wouldn’t clear up. I did go to the doctor who said “you will be grand!”
I was sorta managing,  there were good days, however others were really horrific. I was in a heap and couldn’t eat anything more exotic than toast. There is always a silver lining though, what girl doesn’t love to lose half a stone!? (3.5kilos)
I wasn’t grand and I got worse, a lot worse. Shigella! It’s a bacterial infection from contaminated food or water, I had picked it up in Colombia a few weeks earlier. It basically gives you dysentry. Four days in Tallaght hospital and I bounced back quite quickly with the help of some good drugs and five IV drips. February was looming and I was skinny! I didn’t have that much energy but I was determined to complete the challenge all the same.
Three excited and motivated ladies met on Friday 1st February in Bushy Park to begin. Myself, my sister Tricia  and her friend, Deborah.  Lots of enthusiasm and sporting our brand new t-shirts we were looking good and raring to go.
I had to take it slowly to start with. My blood pressure was very low after the infection and I really needed to build myself back up. I didn’t mind that I couldn’t run for the first week. I was happy enough to walk. I love the parks that I live near and am really lucky to have so many nice routes on my doorstep. I also walked to work and back, made arrangements to meet friends in coffee shops that would require me to walk some more. I met Tricia and Deborah on Tuesdays and Fridays for runs. Miles are miles however they just didn’t seem to be clocking up. The days on the calendar were flying by but the miles were just not adding up. I was planning my miles around work, rest, nights out and the supermarket! Life has to go on and while it doesn’t sound a lot, 100 miles over 28 days breaks down to 3.5 miles or 5.6 kilometers a day! It actually is hard to fit in on top of “life.”
My poor sister got struck down next with a terrible chest infection. She was in bits and had to mind herself. She lost over a week of the challenge calendar and February is short enough already! She was under pressure to reach the target in the allotted 28 days. She was also trying, like any busy parent does, to keep her home afloat and keep the kids happy!
That’s when we each come into our own, when we had to step up a gear. We could of course quit or cheated. No one would have known or for that matter really cared. We would have known though, we would have to live with the shame! Our sponsors would have “understood” if we needed to bail out of our challenge. Integrity is so important and like me, my sister felt the same. If we say we are going to do something then by God do we do it. We are not quitters!
We both stepped up and rose to the occasion. We had to walk and run further each day. Sometimes twice a day. My sister was so under pressure to finish for the deadline she covered over 80 kilometres in the last week, finishing on the 28th February in style! I managed to finish my challenge with three days to spare. The challenge really wasn’t as easy as I had thought it would be.
That’s what you do when you have pride in yourself. You push that little bit harder. Quitting is always an option and believe me there have been times in my life when I knew I was beaten. That’s how I built resilience and the ability to cope with life. However, the Miles for the Mater was dear to us both. There was no question of us not finishing. Our Grandad had passed away in the Mater Hospital and the care he received in his last few weeks was amazing. We knew that he would be very proud of us and he certainly would not be impressed with either of us taking the easy option! They built them hardy in his day and you didn’t walk away from your responsibility / commitments. You stuck them out, especially when it got hard.

Thankfully the weather was mostly kind to us in February. The daffodils were waving at us and the ducks in the pond seam to enjoy watching us trucking along.

So the moral of the story is:

Thanks to all my sponsors who very generously donated to my fundraising page. I managed to raise over €400 and in total the whole group raised over €500,000. It also gave me another shot of resilience, toughened me up, stopped me complaining when I read about all the people who would benefit from our funds and I got tonnes more vitamin D in February than I ever thought possible!
Thanks again!

Sinéad
About the Author:
Sinéad Kennedy is a Physical Therapist, Yoga Siromani and Pilates Instructor. She has recently qualified as a Personal Development Coach. Based in both Rathfarnham and Dundrum, South County Dublin. She treats and teaches people from all walks of life, including many athletes, especially cyclists, runners and golfers. Recently featured in the Irish Independent, FIT Magazine and Breaking News.ie her Yoga 4 Cyclists class has gained notoriety.
​
A keen cyclist and proud member of Orwell Wheelers she has completed numerous cycling events including The Alto de Letras, Les Cingles du Mont Ventoux & La Marmotte Sportive. She is an accomplished audax-er having done numerous 200km and 300km routes. Sinéad has also completed three Dublin City Marathons, numerous Adventure Races and Half Marathons.