TOUR DE LEINSTER WITH A MONSOON!

By Sinead_KennedyFebruary 10, 2017October 8th, 2020No Comments
I recently had the privilege of cycling for 4 days around Leinster in aid of Down’s Syndrome Ireland. If you don’t know me, four days on a bike is my idea of heaven! It’s like a dream come true and all the better that it was in aid of a really good cause.
What a great event the Tour de Leinster is and if you’re a keen cyclists it’s something you might consider for next year.

Now while you might think cycling an average of 155 kms a day for four consecutive day is tough, I have to be honest. The toughest part for me was visiting some of the special schools along the way.

You see, we forget how lucky we are. We take so much for granted and while it’s ok to complain, there is no harm in a reality check either.

The day centers that we visited along the way could not have looked after us better. Plenty of tea and cake but more importantly, we got to see just how vital fund raising is for Down’s Syndrome Ireland. We also got see where our much needed funds were going and how we were contributing to such a wonderful community.
​(Each cyclists had to raise a minimum of €500, we paid our own expenses.) 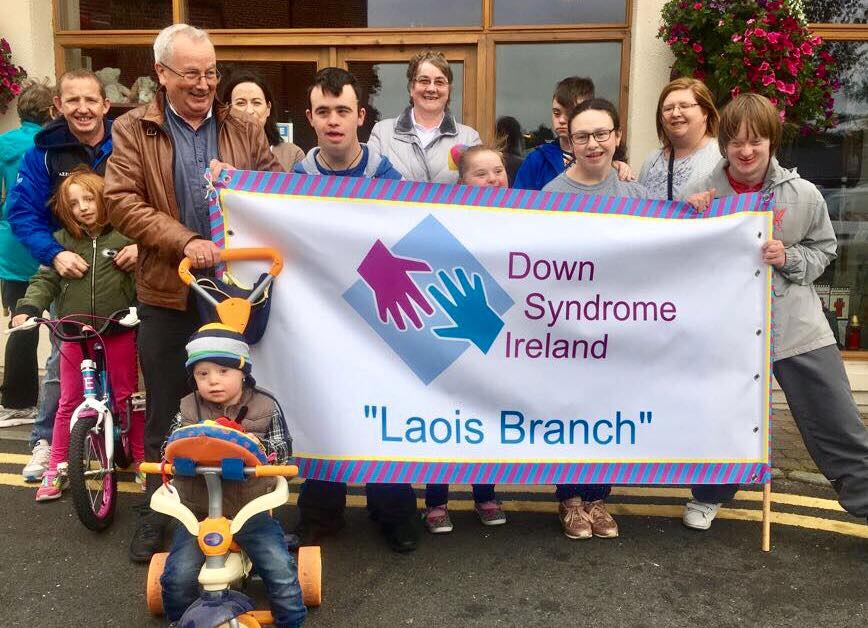 For me visiting St Patrick’s Special School in Enniscorthy was really very touching. We rolled up on day 2 of our cycle, all delighted with ourselves, feeling fit and elated  from our spin. We were greeted by a raucous cheer from a massive fan club and ushered into the school. The kids had gone all out and decorated the halls with bikes, welcome banners, posters and pictures. They had put a lot of effort into it and made our welcome reception truly memorable. We had our fill of tea, sandwiches and cake and then we got brought into the assembly hall for games and introductions.

​A lot of the kids in this school are severe and profoundly disabled.  Standing there looking super fit in my lycra it was really hard to see the wheelchair bound children. Some were completely oblivious to us and trapped in their own world. It’s really heart breaking. Others are mobile, some need assistance to walk but the thing that it so noticeable is that everyone is surrounded by so much love. The carers in the school do such an amazing job.  We had just a glimpse of the day to day routine, it really was just a snapshot of what some people’s lives are like.  While it was a special day and there was a sense of occasion you just know that this school is a very special place with or without a bunch of  visiting cyclists.

The festivities started with us giving certificates to the Students of the Week. Big rounds of applause, smiles and hugs, each child eagerly waiting on their name to be called. What a lovely thing to do on a Friday afternoon. You certainly forget about your troubles when you see these kids. It really was very emotional but a joy to see them so happy. I heard later that day, on average the school loses 3-5 students a year. Sadly it’s not because they change school or move away from the area. I don’t know how the team cope at all but I guess, knowing that they helped that child in this life is a just reward for the sadness of losing a student.

A grand prix track was set up and some of the kids challenged us cyclists to a race! Two laps of the assembly hall on scooters the students easily left the two chosen lycra clad competitors for dust. The hall was alight with laughter, cheers and screams. Everyone was naturally cheering the kids on but for the life of me I can’t understand how two grown men on kids scooters were such poor competition! Falling off was just the half of it, not getting momentum and just basically letting the side down. It was all in good fun and certainly a sight to behold.

We left the school but not before a group photo. All the kids and us, I made a friend. A lovely little girl who took a shine to me. She held my hand and just would not let me go. She had a sinus infection but it didn’t seem to bother her. She just kept smiling up at me. I’m sure I wasn’t the first or last to get her unconditional love. I felt very lucky to have been picked by her. It really was a pleasure to cycle and to raise money for such an awesome school.

We also heard that the roof leaks non stop, they have been trying to get vital funding for the last ten years to no avail. The building needs a lot of repair work and is in need of extensive modernisation. It really does make you wonder just how corrupt this country can be and how scandalous it is, that our most vulnerable citizens have to sit with buckets in their classroom.

Such an eye opening experience and one I won’t forget in a hurry. While I got to cycle away and burn off some crazy on Mount Leinster later that day, I can’t forget the smiles, hugs and warm welcome we got. It’s not all about cycling or being Queen of the Mountain. It’s about doing something nice for others and  having a reality check,  the cycling really is just a bonus.

As for the monsoon, well that was day 3, Tullamore to Mullingar. We had torrential rain for two hours. We were beyond soaked, visibility was tough given the road spray. There was a river running down the side of the road. We just had to pedal faster to get to our hotel for that night. We actually hammered it and we had good fun too. Smashed a few strava segments in our haste! Sure it’s all part of the course. After all we are in Ireland and your have to take the sunshine with the thunder storms. That’s Life!!

If you would like to do some good today why not contribute to Down’s Syndrome Ireland or to your favorite charity. We can’t all give up time but giving up a few quid never hurt anyone. 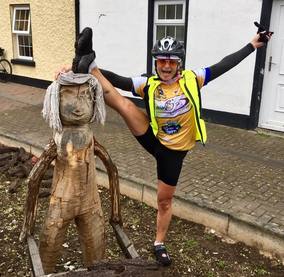 Sinéad
About the Author:
Sinéad Kennedy is a Physical Therapist, Yoga Siromani and Pilates Instructor, based in South County Dublin. She treats and teaches people from all walks of life, including many athletes, especially cyclists, runners and golfers. Recently featured in the Irish Independant, FIT Magazine, her Yoga 4 Cyclists class has gained notoriety.
A keen cyclist and proud member of Orwell Wheelers she has completed numerous cycling events including La Marmotte Sportive. She is an accomplished audax-er having done numerous 200km and 300km routes. Sinéad has also completed three Dublin City Marathons, numerous Adventure Races and Half Marathons.
​​Join me for some warm weather cycling in sunny Spain March 2018.