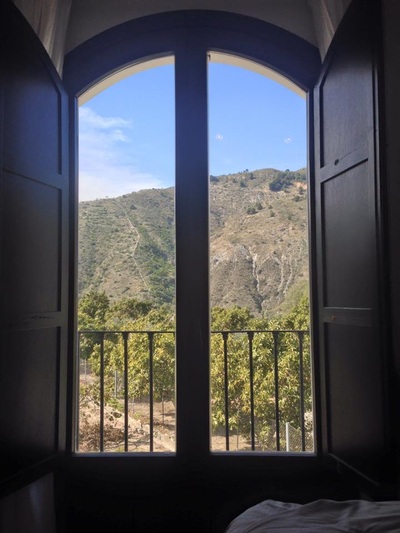 By Sinead_KennedyJune 4, 2016October 8th, 2020No Comments
My second annual Cycling and Yoga trip to the Sierra Nevada, Spain,  was in March 2016. We decided this year to incorporate St. Patrick’s day (March 17th) so that people only had to take four days off work. It also was a great excuse to pimp our bikes and helmets with green tinsel,  wear shamrocks and go a bit mad. 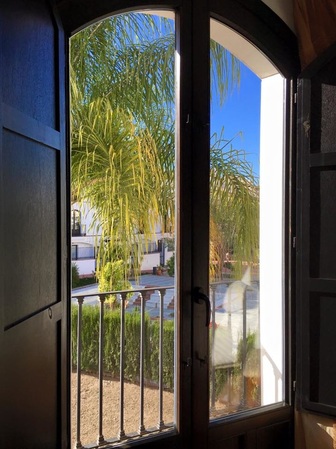 Room with a view. Waking up to this each morning helps!

If like me you’re an avid cyclist but quickly tire of trying to train in the long winter here in Ireland, or northern Europe, you won’t know yourself cycling in Spain. Struggling through head winds, rain, dampness and often poor viability, cycling in Spain is like utopia!

While great weather is not guaranteed anywhere, we were blessed with a sunny, warm and rain free week. Light winds, clear blue skies and temperatures of 18-20 were the order of the week.

Smooth roads, amazing routes, spectacular scenery and fun were also very much on the itinerary. As were four Yoga classes, held on a beautiful rooftop overlooking the mountains. Breathing in fresh air to invigorate and heal our sore tired bodies from all the cycling, it was a match made in heaven.

The quaint town of Velez de Benaudalla, on the Costa Tropical, is our base for the week. Hidden in the foothills of the Sierra Nevada, it really is a small Spanish town. Siesta is observed as is the the great tradition of giving a tapas with every beverage ordered. Anything from biscuits, bread with ham and cheese, chicken wings to Paella would arrive with a coffee or a beer. It really is cheap in comparison to Dublin’s trendy cafes, and in the sun it’s a million times better too. 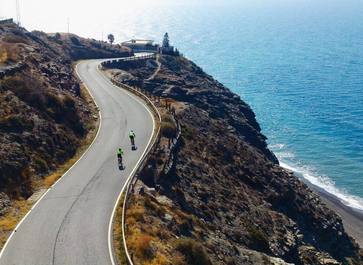 Our cycling routes changed everyday, building up to our grand tour on Thursday. Pro Cyclist Cormac Keeney of Cycle Sierra Nevada is fully in charge of the challenging routes. Many of the routes offer cut offs so if anyone is tired they can cut back home early. Somedays he brought us to the coast and then inland to the mountains, getting panoramic views of where we had been. Other days we were inland but spectacular scenery all the same. Our grand tour on St Patrick’s day took us along the coast for 50km before turning upwards, and upwards we went.  Approximately 28kms. A lovely, long climb with a few switchbacks, some rolls, some glimpses of the coast, teasing communications aerials which you think are the top and they are nowhere near it. Everyone managed though. That’s the thing about the trip. Hills are personal but we all regroup. At the top of our arduous climb was a cafe. Perched high in the middle of nowhere it was busy! Locals enjoying a drink and a chat being gatecrashed by a bunch of overseas visitors. Serrano hams dangled from the ceiling, a hot pot of paella greeted us with fresh crusty bread. It was well earnt. Our longest spin for the week was 115km with 2400m of climbing. 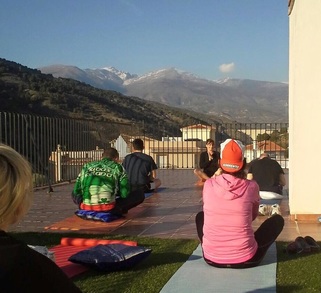 Rooftop Yoga for Cyclists. Views of the Sierra Nevada.

After cycling all day we all enjoyed the benefits of yoga. Led by myself, a yoga teacher since 2008, these are by far my favourite classes of the whole year. Lying under the blue sky, fresh air circulating above us and beautiful orange trees waving as we all allowed our bodies to restore and relax. I guided everyone through nice, gentle but deliberate moves. Easing out sore shoulders, lengthening tight hips, straightening up their backs and gently stretching out bent hamstrings. Everyone was able to take part in the class no matter their previous experience. Some of the men who are great cyclists said they found yoga much harder than tackling the mighty hills of the day. They hadn’t realised how they had let their bodies become so tight and immobile. Lessons learnt for everyone on and off the bike.
​
We had a stretch class on the non yoga days, directly after cycling, learning how to stretch effectively and hopefully initiating a homecare program for people to follow long after the holiday is over.

Having fun. Group photo on the helicopter pad, attempting Yoga in cleats not so easy!

My favourite thing about this trip are my guests. Planning has begun already for March 2017. I have to be honest, the last 2 years the teams I have brought to Spain have been fantastic. Not just on the bike or on a yoga mat, I mean in themselves. Lovely people, with common interests everyone got on well and gelled to form a little family for the week. People have their friends and same ability cyclist will always cycle together but each night at the table, there are no judgements and certainly no rows. Drinks were had, jokes abound and plenty of re-fueling for the day ahead.

It really is a great trip. Sun, heat, amazing cycling, yoga, free time, drinks and delicious homemade food in a great local restaurant. Cycling in the Sierra Nevada has something for everyone. We even found cycling World Champion Peter Segan training there. If its good enough for the pros it’s certainly good enough for me.

Read what guests on this trip had to say about it. Eugenes trip. Andrews Trip.

Facts and Figures:
Average daily temperatures for our visits were 18 degrees in 2016 and 22 degrees in 2015
It’s not about the kilometers in Sierra Nevada it’s about the climbs. Don’t be fooled to think it “only 80km” they are tough and arduous climbs with technical descents. This is not a beginners playground, you are a serious cyclist.
For the week the average is 500km, (very hilly routes),  however there is plenty of free time to clock up more miles or to rest and recover if you prefer.
​We always stop for coffee and photos!
There are four yoga classes and two stretch classes.
A bocadillo (crusty ham and cheese roll) and a coffee will cost you €3-€4
A pint of lager is €2.50
All activities are optional, train as hard as you want.
Places are limited on each trip.

​Join me for an amazing trip, winter miles in the sun, don’t forget your sunscreen!

For further information about this trip please visit our dedicated web page here.
If you would like to register your interest for our Cycling and Yoga training camp, 11-18th March 2017. Please fill out the contact form below.
#CycleSierraNevada #Yoga4Cyclists