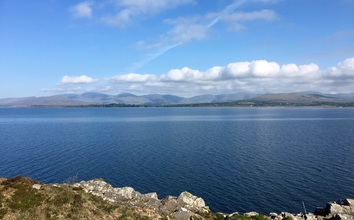 It’s all about the bling!

It’s essential to give yourself some goals, milestones or targets to reach. Otherwise what would be the point? The same way you book a holiday to have something to look forward to. Personal growth and personal satisfaction are key to keeping yourself sane.

Each year I set myself some sort of challenge, be it a Dublin City Marathon, a cycling trip of epic proportions or some sort of educational course. This year is no different, however I just sort of accidentally fell into this challenge without too much thought!

I heard there was a medal and I needed to know how to get it!

I love being a member of Orwell Wheelers cycling club. Always having someone to cycle with, having comradeship for big events and having club mates to push you and challenge you out of your comfort zone.
I first heard about the club’s Summer Challenge way back in March, before the clocks changed and before the exam heat wave. It was decided to set us a goal, a personal challenge and see what we could do with it. A “Randonneur Medal” sounded like just what I needed to add to my trophy cabinet (the mirror in my bedroom where I hang all sorts of tat!)

Have to be honest, I seriously thought WTF when I heard you needed to complete 12 X 140kms cycles to qualify as a “Randonneur!” (Cycling term for long distance spins.)
That’s 1680 kilometres in addition to your normal mileage, in between work and in between life if you have one!
I wasn’t the only one who thought it was a lot. On a few spins there was talk about it.
“Surly 10 would be plenty?”
“Even 8 would do it”
I wondered why twelve? What could it be about 12 that makes it so special. Why would such a random number be picked?
But is it random?
There are 12 months in the year, there were 12 apostles (though I reckon only five of them were any craic), we have 12 ribs, 12 years a slave, there are twelve days of Christmas which also qualifies you to twelve drummers drumming if that’s your thing.

So twelve it is, or if you’re posh like me , a duodecad of cycling routes! 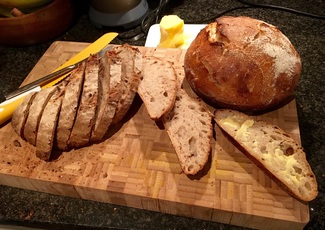 Homemade Sourdough to keep the wolf from the door.

​Now most people in summer set themselves the goal to eat less, lose a few pounds and strut their stuff on the beach. However, myself and most of the people I know don’t qualify “as most people,” we are a little different. My challenge would require me to eat on average 2- 3000 extra calories per 140km weekend. That’s 36,000 extra calories over the summer. (To put that into perspective that’s 51 bottles of wine or 124 magnums.) Now I like a challenge as much as the next person but even that’s a bit beyond me. I decided to go with mostly good solid food for my calories and the odd vino tinto. Carb fuelling on a Friday night and boozing it up on Saturday nights after my spin is by far the more sensible approach. I love a big bowl of Spaghetti Bolognaise the night before a 140km spin. Homemade bread, yes made here in this home, not by me, I’m rubbish at that! By my lovely man who makes excellent garlic bread. Left overs for when you come home, a green smoothie or almond milk and then it’s time to think about your real dinner! You would be surprised how much effort it takes to get all those calories in.

Eager to get my twelve in row, I am game for a challenge. I am excited and little bit daunted by the task in hand. I have calculated that I can in fact reach the coveted big 12 by September (the cut off date) and get my club bling. I have plotted and planned and between a few sportives (bike touring events) and training spins I can do this.

Since hearing about this madness in March I am now 7 x 140km spins down with just five to go. I have another one planned for this Saturday,the Tour of The Burren, Co Clare. The weather is not looking too bad and to be honest I am hardy at this stage.

So how did my 7 go so far? Well overall not too bad! Like anything there are highs and lows. To start with my first spin was in Spain. Lovely warm weather with amazing roads.  My biggests highs so far were cycling in the blistering heat, getting sunburnt, a little dehydrated and seeing Ireland in all its glory when the sun shines. My best spin was the Beara Peninsula, a cracker of a day it was like being on the continent (only better because there was no flooding.) I never saw scenery like it in all my life. If you haven’t been, go! Now! Well worth a visit and if you ask me, way better than the Ring of Kerry. I also got to cycle over the Sally Gap numerous times in blazing sunshine and no wind! It’s a miracle to get both, usually we would settle for just one or the other. 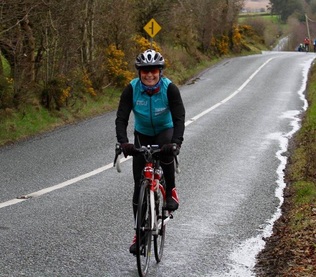 Brr! Cold and damp on the Tour of The Foothills

Lows, well there were a few. I guess it’s to be expected. You can’t expect every cycle go smoothly. The aptly named Good Friday Monster. Over every hill in Wicklow in a lovely head wind. No matter which direction we went the wind kindly turned with us and blew the hell out of us, head on. At least it was dry and sunny.  I was most definitely looking forward to being a big heathen on Good Friday and cracking open the wine on completion.

In early April I was off to the Tour de Foothills, Naas. Cold, wet, windy, hailstones, battling the elements and feeling frozen. A far cry from Spain. I really need to move there. I don’t know that I enjoyed that spin so much but I did enjoy the tea and cake after. It was just too cold. Hot shower, Jammies, a good old, spicy curry from the take away to get the heat back into me and wine were certainly well deserved.

​Number Four was a really tough cycle. Motivation was waning and the task in hand seemed a little arduous. I was sick of the wind. What it is about Ireland? We just have this constant in your face wind that just never lets up. We were doing a another tough route, were all twelve going to be like this? The coffee shop in Laragh was mad busy and it took ages to get to the loo. I wished the boys would just go use the bush and let us girls get on with it. My super lentil soup that I swear by didn’t even cheer me up so I knew I was out of sorts! Even though it was a nice enough day I was cold and miserable inside. The pace was getting slower and we ended up ditching some of the route. I was feeling fed up, saddle sore and thinking this is not any fun any more. I would have gladly sold my bike that day to be honest. Go find a Paddy Powers and a pub like normal people do on a Saturday! Rolling home at 4pm most of the day was gone, I really felt fed up.

So even with the lows I am carrying on. My spirit was a little broken in April.  A weekend away with no bike was just the tonic. Sometimes to stay on track you have to walk away. Go see somewhere new, go with someone who doesn’t cycle or is impartial to the situation. Clear your head and become re energised.

So number 8 is this Saturday , I am way ahead of schedule. July I have other things on but will manage to squeeze one in somewhere. August should see me coasting towards the finish line with my grand finale  planned for September in the Giant’s Causeway. 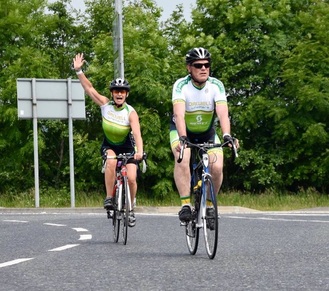 So for now it’s time to get the kitchen stocked with pasta, it’s amazing how much time I am spending in the supermarket. The other side of achieving anything is to plan ahead and pay attention to detail. “Failing to plan is planning to fail” said Benjamin Franklin . So my to do list this for this week’s cycle is to make sure I get two new spare tubes for my tyres, parmesan cheese and nice bottle of red!

Join me for a cycling adventure in Spain, March 2017. We won’t be doing 12 long spins! DETAILS HERE

Sinéad
About the Author:
Sinéad Kennedy is a Physical Therapist, Yoga Siromani and Pilates Instructor, based in South County Dublin. She treats and teaches people from all walks of life, including many athletes, especially cyclists, runners and golfers. Recently featured in the Irish Independant, FIT Magazine, her Yoga 4 Cyclists class has gained notoriety. A keen cyclist and proud member of Orwell Wheelers she has completed numerous cycling events including La Marmotte Sportive. Sinéad has also completed three Dublin City Marathons, numerous Adventure Races and Half Marathons.